"Stories from my life come up, but she doesn't need me for material"

Martina Cole is the author of 12 hugely successful novels set in the criminal underworld, the latest of which is The Take.  Aged 46, with two children, she lives in Essex, near where she grew up, organises creative-writing workshops at Wandsworth and Belmarsh prisons and is a patron of Chelmsford Women’s Aid.
My friendship with Eddie is based on mutual respect but also on the fact that we have so many friends in common so there’s always a crowd of us.  We have a really good rapport.  I’m the one who gets the crowds up.  I’m a party person.  Eddie’s sister Elaine is a big friend of mine, too.
When Eddie got home from prison, we had dinner at PJs in Covent Garden and we just picked up where we’d left off.  All these people were sending us over champagne.  It was a great laugh.
And then later, at my birthday party last year, I persuaded him to write his autobiography, I just said to him, “Give your side of the story.” I knew the publishers would want it and I knew they’d do a good job with it.  We told them if they didn’t, we’d send the boys round.
People forget Eddie was a multimillionaire by the time he was 21.  I think his is a life well-lived, no matter what happened, and I think we’ve got that in common.  Everybody wrote me off when I was an unmarried mother at 18; it was hard being Catholic with an illegitimate child.  I worked every hour god sent. I had three jobs at one time. I bought my first house when I was 21 – I was the first person in my family to do that. It’s all about how you perceive yourself.  You can either sink under a quagmire of everybody else’s opinions or you can say, “That happened, deal with it. I’m getting on with my life.”
I know if you do something, you have to go to prison; I’m an advocate of that, it’s the law.  But because of my background, I think people must be given a second chance.  A lot of my books are about the environment people come from. Where else are you going to go? You’ve got to give people another way of life.  I’ve done so many creative-writing classes with young people and they’re doing so much time, it’s frightening.
He’s so self-effacing, Eddie.  He’s wonderful with women. The man’s a gentleman. If we’d been the same age. I’d have snapped him up.  I would have been straight round his scrap yard. One of the reasons we get on so well is I actually do think like a man. It took me years to realise it.  I tend to suss men out pretty well.
I’ve never forgotten reading a quote by Horace when I was 13. “If possible, honestly, if somehow, make money.”  My mum’s mum used to say that life, even at its longest, is short and it’s so true.  You’ve got to make the most of it. I’ve made the best of everything and Eddie has too.

With his brother Charlie, scrap metal dealer Eddie Richardson was the head of a notorious south London criminal gang in the 1960’s.  He served 11 years in prison after being convicted at the 1967 ‘Torture Trial’ for crimes of violence fraud and extortion and in 1989 served a further 12 years for conspiring to import drugs. Aged 69, he now lives in Kent and paints.

Martina and I have known each other a long time. Things just click with some people, don’t they? She’s a very down-to-earth person, no bullshit, and I’m like that too.  We’ve got quite a few mutual friends – she knows some lads from Essex I know – and now I’ve been out four years, we’ve been able to get to know each other properly.  There’ll be a birthday, she’ll book a table at the RAC Club do for Alzheimer’s there’s the Soho Ball every year, we’ll go out for a meal – not a problem.  In our sort of world you have close friends who you care about: my good friends are still my good friends, and she’s just the same.
Martina was the one who mentioned the idea of me writing a book. I’d kept a low profile, or tried to, but everybody else had put me in their books and used my photograph for 40 years. My brother wrote one, which wasn’t very complimentary, and then there was a film about him called Charlie, so it was time to set the record straight. Martina’s been a big help. She’ll ring up after a book signing and say, “You’d do well here”.   She suggested I do a signing in Fuengirola – I was going to Spain anyway – and I had a job getting in the shop, it was so packed. It was unbelievable the amount of expats there were there.
Of course, stories from my life come up when Martina and I are talking, but she doesn’t need me for material. She’s a very busy person. She visits prison, does talks, runs writing classes – so she gets quite a bit from her sources.  Everybody’s queuing up in prison to read her books. That’s where I read them first: they’re about old London and they’ve got a very nice flow to them.

People have got a choice in prison: they can educate themselves, come out better people than when they went in. I’ve been in some real bad chokey [solitary confinement] blocks and I’ve also eaten in the best restaurants in the world, so I have seen both sides of life, I suppose. But where I came from, what was I going to be – a lorry driver? At least I’ve travelled, seen a bit of the world, done all sorts of things – even though I have done a lot of time in prison. There’s quite a bit I’d change but, because it’s never going to happen, I’m thinking about tomorrow rather than yesterday.
Martina and I do get on very well and I think if we’d been younger something probably would have happened between us. I admire her because she’s got her success off her own back and she deserves it all. 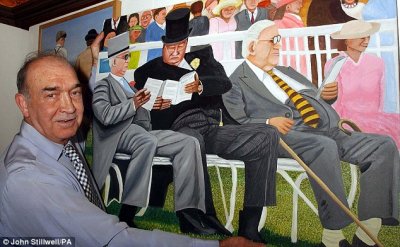 Different strokes: after many a brush with the law,Eddie Richardson has now discovered the power of the paintbrush

This article was written by Will Hobson and published in The Independent on Sunday - 29th January 2006.